The following month, Monique O’Connell, Associate Professor in the Department of History, presented a talk entitled “Visualizing Venice in the FYS: Reflections on an Experiment.” O’Connell’s talk built on Johnston’s “One Map, Four Ways,” as well as on Kristin Lanzoni’s April 2016 DH Kitchen presentation, “Wired! and Visualizing Venice: Digital Art.” In “Visualizing Venice in the FYS,” O’Connell reflected on the digital assignments of the first-year seminar “The Floating City: Public and Private Life in Venice,” which she has taught twice, in Spring 2015 and Spring 2017, experimenting with digital assignments in both iterations.

In addition to outlining the assignments, O’Connell reflected on the costs and benefits of digital pedagogy in the context of the FYS.

DH Kitchen is a series of informal meetings that brings faculty and students together to workshop specific digital humanities (“DH”) projects-in-progress or to engage in discussion about open topics and questions pertaining to the digital humanities. The meetings are intended for DH novices as well as more experienced practitioners in the digital humanities. So, if you are interested in all things, some things, or anything DH, grab your laptop and join us in the kitchen over the coming academic year!

Presner’s lecture, “Assessing Digital Humanities Scholarship: Challenges, Opportunities, and Perspectives,” proposed a series of considerations for determining how digital scholarship advances the state of knowledge in a humanities field. Presner provided a flexible model for assessment by outlining tandem solutions for both scholars and committees to establish best practices for conducting, documenting, conveying, and evaluating digital humanities research.

We invite all faculty, from DH veterans to DH newbies, to participate in a discussion of potential applications of this digital humanities assessment model at Wake Forest.

Join us for a special DH Kitchen/Humanities Conversations lecture on Tuesday, October 18 at 5:15 p.m. in the ZSR Library Auditorium (ZSR 404). Todd Presner will be presenting a talk entitled, “Assessing Digital Humanities Scholarship: Challenges, Opportunities, and Perspectives.” (Read the preview: Presner’s Journal of Digital Humanities article, “How to Evaluate Digital Scholarship.”)

Todd Presner is Professor of Germanic Languages, Comparative Literature, and Jewish Studies at the University of California Los Angeles. Since 2011, he is the Sady and Ludwig Kahn Director of the UCLA Center for Jewish Studies. He is also the Chair of the UCLA Digital Humanities Program, which offers an undergraduate minor and graduate certificate, and faculty co-PI on the “Urban Humanities” initiative at UCLA. His research focuses on European intellectual history, the history of media, visual culture, digital humanities, and cultural geography.

Presner is the author or co-author of four books, as well as the founder and director of HyperCities, a collaborative, digital mapping platform that explores the layered histories of city spaces. Awarded one of the first “digital media and learning” prizes by the MacArthur Foundation/HASTAC in 2008, HyperCities is an interactive, web-based research and teaching environment for authoring and analyzing the cultural, architectural, and urban history of cities.

How does Presner conceive of DH developments over the five years since “How to Evaluate Digital Scholarship” first came out? Which of the assessment guidelines Presner laid out have which higher ed constituents found effective? Have new ambiguities emerged? What do Academic Review Committees, Chairs, Deans, and Provosts in the humanities here at Wake Forest wonder about digital scholarship and its becoming evaluatable? Come find out!

Join us for a DH Kitchen on Friday, April 8 at 3:00 p.m. in Reynolda 301. Led by Kristen Lanzoni, this week’s Kitchen will center upon Visualizing Venice, a collaborative research effort of Duke’s Wired! Lab.

The Wired! Initiative at Duke University engages digital technologies in the study of art, architectural, and urban history. While digital approaches have many capabilities, our emphasis is exploring the built environment over time — both particular structures and the urban fabric in which they were constructed. The use of digital tools and especially visualizations, prompt new questions and understandings about architectural monuments, their relation to the larger urban setting, and the role of sculptural and painted decoration, such as altarpieces, in spaces. This talk will focus on one of our collaborative research enterprises: Visualizing Venice, an interdisciplinary, cross-cultural collaboration that supports mapping, 3D modeling, and representations of change in Venice. Research projects have public facing and pedagogical outcomes that bring the city to life for varied audiences.

Kristin Huffman Lanzoni is an Instructor in the Department of Art, Art History, and Visual Studies at Duke University. Her current research focuses on the uses and configurations of space for the visual arts, in particular the spatial relationships formed in early modern Venice. Her interest in reconstructing altered or demolished structures led her to work with the Wired! Group at Duke as well as Visualizing Venice. She is currently directing several digital projects including Venice Virtual World and the Venice Interactive Virtual Atlas (VIVA), which will result in an exhibition at the Nasher Museum of Art at Duke in Fall 2017. She has most recently worked with Duke graduate and undergraduate students to reconstruct a demolished palace on the Giudecca in conjunction with her curatorial work for the exhibition Water and Food in the Venetian Lagoon held in the Ducal Palace, Venice (September 2015–February 2016).

An open invitation to all digital humanists or people working on digital humanities projects! Save the date for the annual Day of Digital Humanities that will take place on April 8, 2016.

A Day in the Life of the Digital Humanities (Day of DH) is a project looking at a day in the work life of people involved in digital humanities computing. Every year it draws people from across the world together to document, with text and image, the events and activities of their day. The goal of the project is to weave together the journals of participants into a resource that seeks to answer, “Just what do digital humanists really do?”

This year, the event will be hosted on behalf of centerNet at the Laboratorio de Innovación en Humanidades Digitales (LINHD) in Madrid. For this reason, want to innovate and make the day more collaborative. We will boost multilingual participation and group cooperative activities. The LINHD team created the 2016 Day of DH website now, which is now open for registration. 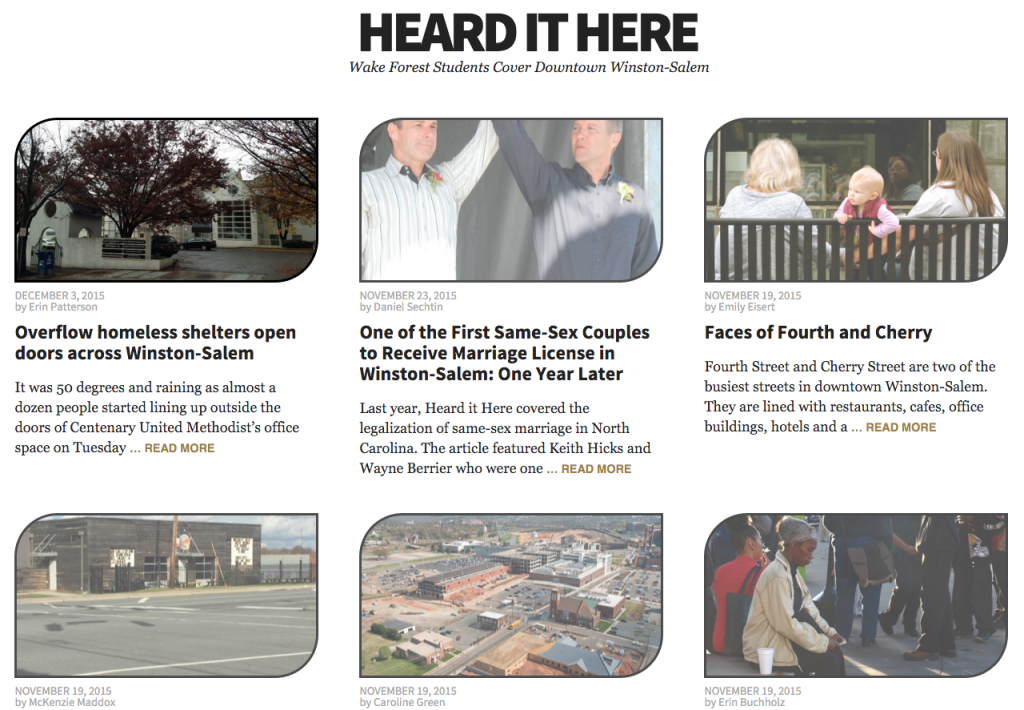 Join us for a DH Kitchen on Friday, March 3 at 3:00 p.m. in Reynolda 301. This month’s Kitchen centers around Heard It Here, a regular news report about the downtown community in Winston-Salem. Phoebe Zerwick’s personal website, Associate Professor of the Practice (Writing Program, Journalism) and students who helped to produce Heard It Here will discuss how they used a digital platform to reach a public audience. 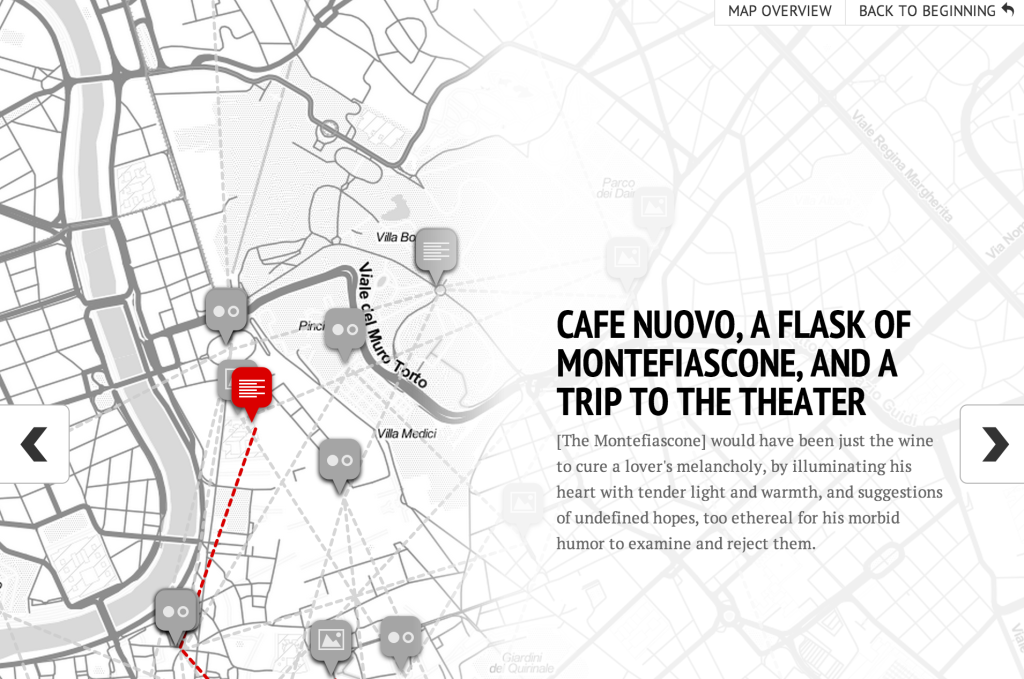 Be sure to bring your laptop!

A partnership of 23 liberal arts collaboratively developed the Institute for Liberal Arts Digital Scholarship ILiADS (ILiADS.org). IliADS is project-based and team-based; it offers an opportunity for focused support of a digital project — your project — as you work alongside other colleagues and experts.  ILiADS (ILiADS.org) offers participants a summer institute where they may develop projects as a team (faculty, student, librarian, technologist, other experts) and also interact with experts who can further their project goals. Unique to ILiADS and recognizing the role digital scholarship plays in undergraduate education, priority will be given to proposals that include student collaborators. Project proposals at any stage, idea through to implementation, are welcome. Our ILiADS Coaches will guide project teams from the point at which their proposal is accepted to the end of the institute week. During the summer institute week, teams will spend significant time working on their projects and coaches will connect teams to experts in the digital methods and the technologies necessary for the teams to develop their project goals, processes, and outcomes. ILiADS 2015 participants described their experiences as, an opportunity to “focus as a project team” in the planning and development of digital teaching and/or research projects in a setting that “fills a gap in our current professional development milieu.”

At ILiADS, ideas grow through collaborative, iterative processes. During this week, teams composed of some mix of researchers, librarians, technologists, and students are invited to build upon established digital pedagogy or research projects and/or launch new ones. Whether you’re learning how to clear significant hurdles or you’re just getting off of the ground, ILiADS’ Experts will consult with teams to advance their goals. Over the course of the week, team members will learn more about their own collaboration and how to sustain their project into the future. Projects of all types, and at any juncture, are welcomed. Submit your project proposal by February 22, 2016. Upon acceptance, an ILiADS Coach will be in touch to discuss the project ideas, expertise needs, and to answer questions on how to build a strong team.

We have reached out to a group of vetted experts, but we are also open to bringing in other experts based on compelling needs of projects.

Please email the members of the ILiADS 2016 Steering Committee at 2016@iliads.org.

The interdisciplinary online journal Southern Spaces invites researchers, writers, teachers, artists, documentary producers, and geographers to submit materials for the 2017–2018 “Digital Spaces” series. We encourage multi-media articles and projects that address real and imagined spaces and places of the US South, but also welcome submissions that model innovative digital scholarship, activism, art, and teaching wherever it takes place. For more information, view the call for submissions.

The “Digital Spaces” series invites projects that explore the possibilities of publication, curation, and data visualization, as well as theoretical submissions about the politics and disciplinary tensions of digital scholarship. In addition to articles, photo essays, presentations, and short videos, Southern Spaces will publish peer-reviewed digital projects as a part of the “Digital Spaces” series. Projects may take a variety of forms, including multi-media and multi-modal submissions. Please email managing editor, Meredith Doster, with any questions.

Possible topics and themes include, but are not limited to: 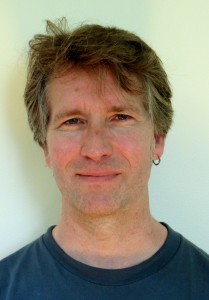 The DH Speaker Series continues with Michael Newton, Technology Lead at the Carolina Digital Humanities Initiative and Digital Innovation Lab. Join us on Friday, October 23 at 3:00 p.m. in Reynolda 301 for his talk titled “DH Sustainability: How the UNC Digital Innovation Lab Addresses Concerns of Maintenance, Portability and Generality in Digital Humanities Platform Design.” Newton will speak about DH Press within the context of designing a digital humanities tool that builds capacity for DH practice and ties into efforts to foster a DH community on-campus and beyond.

Michael Newton comes to digital humanities work with strong qualifications in both information technology and the humanities. Newton graduated from the University of California, San Diego with a B.A. in Computer Science, which he earned while working at a popular computer game company. He went on to earn a Ph.D. in Celtic Studies at the University of Edinburgh, Scotland, and has published extensively in that field. In 2007 he was awarded a Digital Humanities Initiative grant from the National Endowment for the Humanities to create a digital collaboratory for Celtic Studies which was hosted for several years by iBiblio.